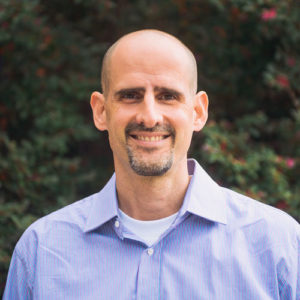 Elder ('21)
I am from Raleigh and went to UNC-Chapel Hill in 1993, where I met Katherine, a California girl, whom I married in 1997. We've lived here ever since and have been part of the Bible Church family since 1994. We have three beautiful children – Savannah (2005), Isaiah (2007), and Solomon (2014).
I work as a Humanities teacher at nearby Trinity School, where our three children attend.

How did you become a follower of Christ?

I grew up in a home where Jesus was known and admired, and my family went to church in my early years. By early high school, my family had largely drifted away and I had only a nominal connection to Christianity. By the time I entered college, I was actually an ardent and vocal opponent of what I perceived as Christianity, often mocking parts of the Bible and arguing with campus preachers. Reflecting, I realize now that I never really understood the Gospel and thought that being religious was about going to church and behaving yourself. What I really wanted was to be the "boss of my own life" and, in the process, be popular and admired. God had much better plans for me, though, and He knew my weak spots. Using Katherine, Scripture, and C.S. Lewis, among other tools, He opened my eyes to my own self-absorbed wretchedness and brought me to repentance in the summer of 1994. Since then, He has been disciplining me whom He loves to become more and more like Him. Though I often fight Him tooth and nail, He has stubbornly persisted in bringing me to commit more and more of myself to His lordship. In doing so, I’m seeing more and more how amazing He is and how precious is his grace, marvelling that “no condemnation now hangs over the head of those who are in Christ Jesus; the new spiritual principle of life in Christ lifts me out of that old, vicious circle of sin and death” (Romans 8).